Well, where does the market go from here near term?

I don’t really know, but, I do know that the bulls and the bears have a fight on their hands. While that battle wages we will remain on the sidelines as spectators. There is an old Wall Street axiom: “The trend is your friend”; and clearly no friends can be found at the moment.

Allow me to speculate, just for fun of course, and paint a picture of the upcoming battle. A lot of market participants are worried that we could see a repeat of the extreme volatility the market experienced on May 6th and are more likely to sell on bounces. On the other hand, some traders feel they missed out on a bargain during the sharp decline and will want to buy on the dips. As a result the market bounces up and down with last week’s high acting as resistance and the low set on the 6th acting as support. The market will be stuck in a trading range for a period of time, going sideways until the market breaks out and the winner emerges.

If a scenario like this plays out we will take our cue from the ultimate breakout of that trading range.  As a new trend reveals itself we will be prepared to act. 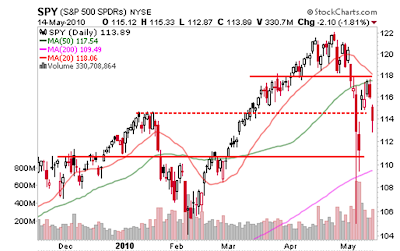 Stephen L. Gerritz, CFP
Medford, Portland, Clatskanie, Oregon, United States
Stephen L. Gerritz, Registered Investment Advisor Representative,is Chief Investment Officer of Gerritz Wealth Management, Inc., a "Registered Investment Advisor", and an IRA Roll-Over Specialist. Stephen believes in taking a proactive approach to money management. "The old buy, hold and hope method of investing propagated by the Wall Street herd has devastated the average investor's portfolio." Gerritz uses investment strategies that seek to protect investors from the steep declines that come with bear markets, while striving to capture gains when the market is rising. The results of his methods are reduced volatility and the potential for better rates of return. Conflicts of interest are avoided because our compensation is not based on commissions. The minimum size account we accept is $50,000. Call us at 541-608-9958 for a free telephone consultation.