Yesterday the market reversed its recent downtrend and was up sharply. The trough formed by that advance is now important support. As long as the major indexes hold above that level, the decline from the mid-September highs will be properly viewed as just another typical bull market correction. If yesterday’s trough is decisively penetrated however, the odds favor a much deeper decline. It is probably going to take a few days for the market to give us enough information on which to make a reasonable guess about the near-term direction of stock prices. 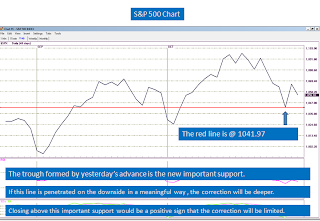 Many junk bond funds were flat or down – even though the stock market was broadly up. That is a normal delay function that we frequently see expressed in the junk bond market. The mutual funds got hit with redemptions on Wednesday and had to sell bonds yesterday. Hopefully, they were able to get all the selling to cover redemptions completed yesterday. If so, junk bond funds may resume their uptrend and move higher today.