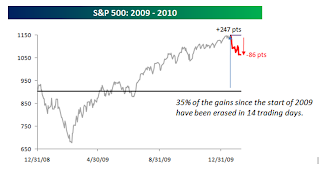 I liquidated our equity holdings on Dec. 21st and 22nd; so we have avoided the pain of this downturn.
We are primarily invested in high yield / income bond funds. While these funds have held up very well, they have begun to slowly weaken. Our moving average stop loss program is nearing a sell point. Should our montoring system deliver a sell signal it will be acted on the very next day.
Subscribe to Gerritz InSights by Email
Posted by Stephen L. Gerritz at 1:37 PM